Enter the fascinating world of military imagery collection and analysis from the use of balloons onwards on the website for the Medmenham Collection, which is located at Chicksands, Bedfordshire and is dedicated to preserving the legacy of this work…

Here are some related links…

If you’re looking for information on the various models of the iconic Spitfire, then this is a very good place to start. They revere it here…

This man (third from right) lost his life along with most of his crewmates when his Avro Lancaster Mk.I R5904 (LS-G) of 15 Squadron crashed near Oosterhout on 21 July 1944 on returning from an operation to Hamburg out of RAF Mildenhall. His family wanted to have his St. Christopher medal back, but it was not found.

and their persistence has paid off…! 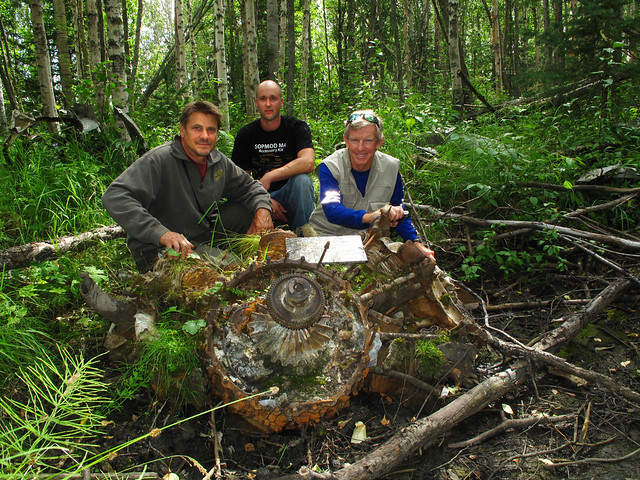 This plane crashed in Little Smokey, Alberta while flying from Edmonton to Watson Lake as part of a larger journey from Great Falls to Fairbanks for transfer to Soviet pilots due to then take it across Siberia. Two men died when it crashed, Lt. Frederick Reardon (Pilot) and F/O Robert Armbrust (Co-Pilot). In 2009 the pilot’s son visited the crash site…

This plane was shot down by anti-aircraft fire on 21 April during an armed reconnaissance operation fron Forli to the Po valley, killing all four crew. They were… This plane crashed on 26 November 1943 near Arnhem with six crewmen confirmed killed and one whose remains were never found. Their story here…

On 7 July 1940, this aircraft flew out of Alconbury near RAF Wyton on an operation to Ghent and crashed at Dudzele near Bruges after being shot down by a Messerchmitt Bf109E of the ‘Grünherz’. The three who died were: